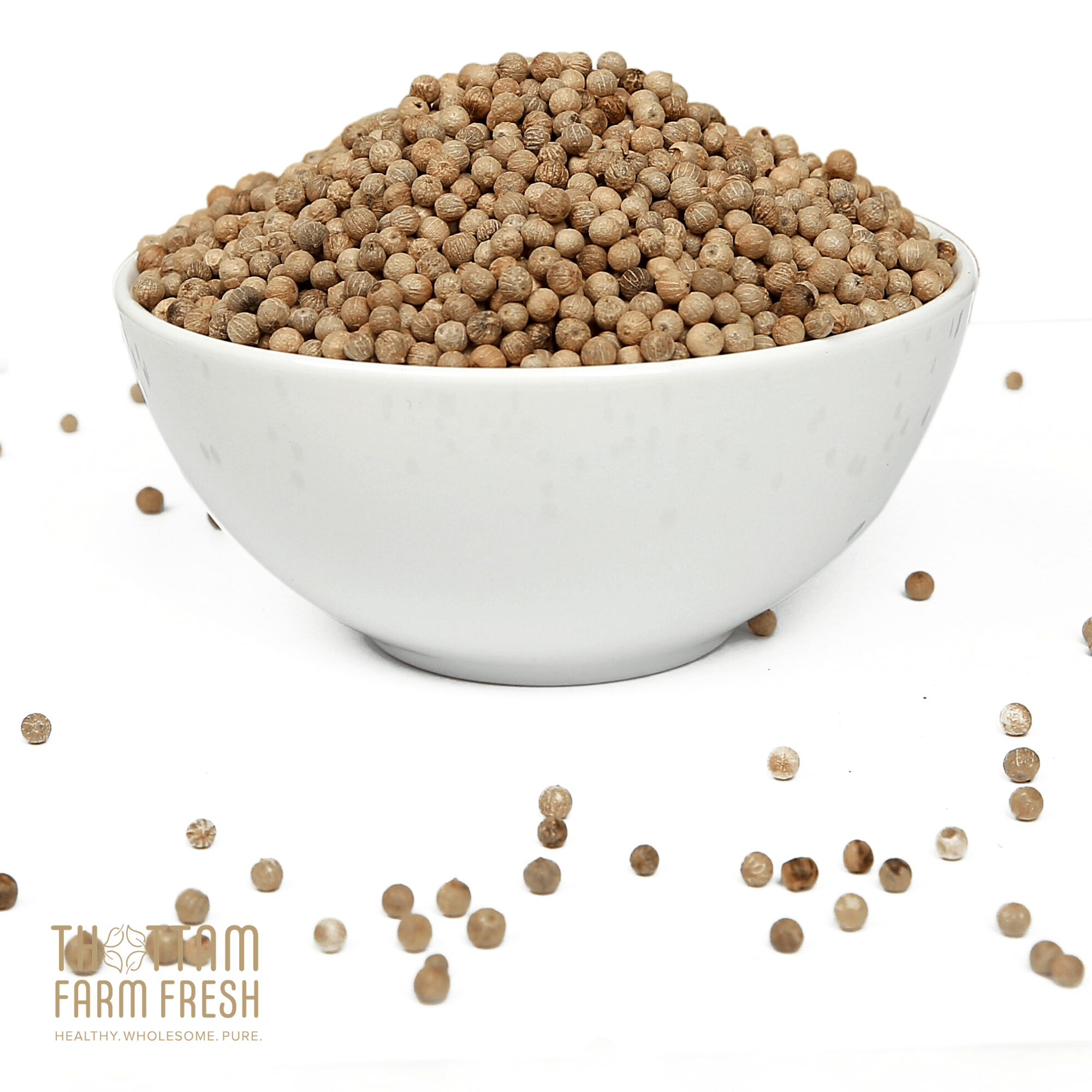 Ever wondered what white pepper is? Here is a short white pepper evolution tale. Black pepper and white pepper are the birds of the same feather. This means black pepper or the Piper Nigrum plant is the mother of white pepper as well. White pepper is just the ripe berries of the black pepper plant which undergoes a process. The berries are allowed to stay on the vine a little longer than that of black pepper until they are fully ripe. The plucked ripe berries are then soaked and fermented in water until the red or yellow skin peels off. What is left behind is the inner seed which is washed and dried later. And here comes the white little beads called white pepper, leaving behind its strong flavor and pungent odor along with the removed outer coating. However, it retains a tiny bit of peppery characteristics.  End of the story. Well, that was not the earth-shaking story as expected! However, this should give you basic information about “sister pepper” or white pepper. White pepper has a couple of characteristics that differ from that of black pepper in terms of its flavor and aroma just like every child is unique.

Need a peppery bite? Have you showered your taste buds with divine and earthy flavors of white peppercorn? It will be a whole new experience for the black pepper devotees. White pepper retains only a mild flavor after it is processed. Some say it tastes hot and winey. Others say it is just spicey and not really hot. However, what everyone commonly agrees with is the earthiness of white pepper. It has a musty and grassy flavor depending on the process used to make white pepper. The aroma and pungency are mild in white pepper. Nonetheless, flavor depends greatly on the grade of white pepper you buy from the market. White pepper is not just valued for its flavor but also the nutrients it contains.

The creamy white bubble of nutrients

The white creamy bubble is a power pack of nutrients with low calories. It will help you to cut back your salt intake. This is simply because salt will not provide a sufficient amount of vitamin C, calcium, and iron as you use a pinch of it in food. However white pepper can replace salt for the same benefits. Another trace of minerals found in white pepper is manganese which has a 2 percent value for every 1 gram used. To be more precise, one teaspoon of white pepper has a total fat of less than  0.1g,  0 cholesterol, sodium of less than 1g, carbohydrate of 1.6g, and protein of 0.2g. It also has the calcium of 6mg, potassium of 2mg, iron less than 1mg, and vitamin C less than 1mg. That pretty much sums up the nutritional value of white pepper. However, the nutrients and flavor of white pepper remain intact if white pepper is stored well.

How to store white pepper?

There is no unique way of storing the sister pepper of the King of spices. All you got to do is, store it in an airtight container. Make sure the container is placed far from the reach of light. Now here is the thing! The form in which white pepper is stored matters a lot. Ground pepper can be stored but has a short shelf life of up to three months. Because ground white pepper combines with oxygen (oxidation), it reduces the flavour and aroma immensely. Whole white peppercorn has a better shelf life of three years as they are not powdered and their compounds are undisturbed inside the white beads.

How to use White pepper?

Wouldn’t you use white pepper to try your belly luck! Use white peppercorn for a hale and hearty life. The touted white pepper holds a special place in the hearts of people not only for its flavor but for its medicinal properties which especially help in gut health(one among many health benefits). There has been an ongoing debate among chefs around the world about when to use white pepper. A few say they are added while cooking while others say they are used to sprinkle on the top of the dish once it reaches the table.

There are other sets of people with an opinion that cooking with white pepper for a long time produces a trace of bitterness in the dish. Nonetheless, everyone is on the same page when it comes to the freshness of instantly ground white pepper. It brings out the most authentic flavor than store-bought ground pepper which has lost most of its flavor.

The reason to use white pepper starts from the basic feature which is the color. White pepper is used for creamy soups, fried rice, stir-fries, marinades, etc. Predominantly used in white sauces and mashed potatoes for aesthetic reasons. It helps to retain the color of the light-colored dish. Those black specks may not be appealing if black pepper substitutes white pepper.

White pepper is also used in food which highlights earthy flavor as the earthiness makes its way to the dish from the white pepper used. It is used in Mexican, Indian and Asian cuisines. Vietnamese soups, the pork dishes, and the hot & sour soup get their hotness from white pepper rather than chilies. Last but not least, it adds a complex flavor to the dish as white pepper is allowed to fully ripen and later fermented.

How to buy organic white pepper?

White pepper is produced on their own farm in the Angamaly district of Kerala( Southern province of India) without the use of pesticides, insecticides, or any fertilizers. They take extreme care of hygiene in the processing and packing environment to retain the true authentic flavor of organic white pepper. They are sure to provide you one-of-a-kind cooking experience.