A native to the Maluku Islands in Indonesia, cloves are one of the most important Asian spices. In essence, cloves are the dried aromatic flower buds of the Syzygium Aromaticum tree. The uses of clove are primarily as a flavoring agent and also as a therapeutic agent, as there are many health benefits of cloves.

Cloves are prevalent in Asian countries such as Indonesia, India (Tamil Nadu, Kerala, and Karnataka) and Pakistan. Interestingly enough, during the 13th and 14th centuries, cloves were very highly-priced and transported from Indonesia to China, Persia, India, and China in large quantities.  – This coveted spice became a source of contention among colonial powers as they all wanted a monopoly over its production. Finally, the Dutch ruled the roost in 1621 and took over the Maluku Islands. Even today, cloves continue to be commercially important in various parts of the world. 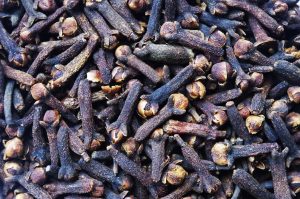 Uses of Cloves
Cloves have high nutritional value, being rich in potassium, calcium, magnesium, Vitamin A, C and E. Given the woody texture and aromatic quality of clove, it is often used in apple ciders, mulled wines, chai spice mixtures and desserts like gingerbread. As an oil, it is found in soaps, perfumes, and lotions, as well. Most importantly, clove’s primary use is due to its medicinal properties, which we will explore in detail below.

Oral Health – The anti-microbial properties of cloves make it an effective agent to fight oral diseases. Its effect on plaque, bacteria, and gingivitis makes it a more powerful mouthwash than any other commercially viable oral rinse brand. Clove bud extracts significantly curb the growth of oral pathogens and it and it can also fight toothaches.

Cancer – Clove’s anti-oxidant content effectively impedes the growth of cancerous cells. According to research studies, half a tablespoon of ground cloves contains more antioxidants than half a cup of blueberries! Clove oil, in particular, acts as a useful agent to fight breast cancer cells.

We hope all this insight surrounding the amazing benefits of cloves inspires you to integrate this magical spice into your food, beverages and beauty products!